As you may have noticed, I finally finished the first public version of mealhogg. This is very exciting for me, it's my first coding project, you can download it on the projects page. I spent the summer learning python to help me automate basic housekeeping administration tasks, and to make some stuff I do at work a little easier. Normally I hate computers because I don't really understand how they work, so I'm punishing their existence by enslaving them to do household chores for me. Mealplanning especially is something I thought would be a good task to start with.

What I like to do to save money is pick meals that have the same ingredients for a week, so when I go to the grocery store I'm not buying a whole bunch of stuff, most of which will spoil before I have the opportunity to use it all. This does actually save me a lot of money, and my typical grocery bill is 10$/week (averaged) or less because of my system. Before, I had an excel spreadsheet and was using the 'filter' function to show me all the recipes I had with the same ingredients, but it was so hard to choose.... oh I don't want to make that this week.... I'm tired of this recipe.... I don't feel like it.... it ended up taking like 15 minutes to choose. Now I just have mealhogg randomize the options and it takes a few seconds! I'm posting it here in case anybody else might think it's useful, it's all set up as an .exe file in a .zip folder with everything you need so it's super simple to use. It's also totally free to download and use (although I reserve the right to add a 'donations' button later if I want and think it's good enough). I'm going to keep tinkering with it here and there when I learn something new or have a good idea, but for now I'm glad it's done and that I learned a lot making it. Now I can move onto some different projects, like knitting a scarf for myself and some sweaters for hoggsband. Keep an eye out for those later.

What else has been going on... well I sprained my ankle thanksgiving weekend. That sucks, I had to push back my next fencing lesson because I couldn't walk for a while. It's getting better now although it's still sore and weak. I've been staying off of it and resting a lot. That's it for this blog post. See you soon, and if you have any problems with mealhogg just let me know, you can email me at hoggboss420@aol.com. And thanks for 1000 views on my website!

Hi again Hogg fans, I haven't updated in a while, sorry! So let me tell you about what I've been up to...

The other day I went to the asian supermarket to get mooncakes, I was hoping they would be on sale since the mid-autumn festival was over but I ended up paying full price anyway... at least they had some. I've always wanted to try mooncakes ever since I was a little kid and I would watch reruns of sagwa on TVO Kids. They also had kabocha squash on sale, which I've always wanted to try cooking. The weather was so nice and cool and squash is in season, it make me think Wow! It really is autumn. Too late, the weather just got hot again, but it made me nostalgic thinking the seasons were about to change.

What else have I been up to? Well I started taking fencing lessons! It's a lot of fun and I really hope to keep up with it. I knit myself some mittens for winter (the weather network says it'll be extra cold this year) which you can see in the arts & crafts gallery, And I've been getting into gundam building lately. Hoggsband helped me with the entry level RX-78-2 gundam, check it out: 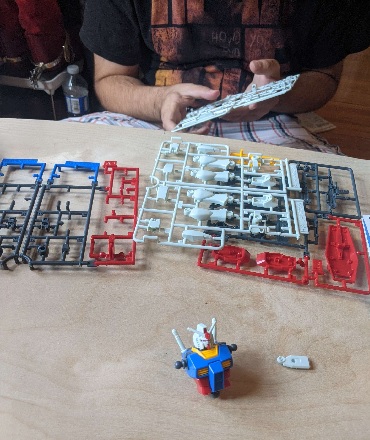 Maybe once I build some more I can set up a gundam gallery. Other than that I've just been working, cooking, practicing my Bass, working on my DDR scores, reading, doodling, checking out bands that come into town, and doing anything else than helps keep me off of social media. See you again soon!

Hi hogg fans, you'll never believe my rotten luck lately. Not only did I have an accident with a serrated bread knife trying to cut some sourdough I made, slicing my finger open from the first to the second knuckle, but I also fell on the stairs while wearing socks and got a MASSIVE bruise on my ass, and got bitten by a tick. Man.

Well anyway I'm ok now. Super bored. And hot (my new place has really bad air conditioning). I've been trying to occupy myself by going to the farmers market, and the arcade to play DDR, and riding my bike to the grocery store to browse, and reading, and learning HTML, and working on my masters. But it never works, I finish one activity and I'm like now what? I can only buy myself a little treat to pass the time so much before I run out of money. There haven't been any good bands in town and the bus to the next city over still isn't running because of the pandemic. I've picked up swimming as a hobby as well. I go down to the city pool once a week-ish for 6$ to swim laps, keep up my stamina. All this exercise is giving me more energy throughout the day and nowhere to put it. It's hopeless.... there's nothing I hate more than being bored and not having a task to do. Maybe I should crochet a mockup for some mittens, so I'm ready to go once I buy some nice yarn and make myself a pair for the winter? Hoggsband isn't any use either, he doesn't do anything all day except play video games. How can somebody live like that.

I miss going to shows so much. I recently moved at the beginning of the month and my new place is much closer to downtown, so I have more opportunities to do cool stuff now than when I was living in the suburbs. The band I saw this week was awesome, the first time I've gone out since.... no idea how long now. Celebrity Death Slot Machine, check it out:

The opening band wasn't that great but sometimes that's just how it is. There's another show I'm thinking of seeing on the weekend, with some harsh noise bands. I'm hoping there'll be a mosh pit. I miss mosh pits too. I have too much energy. Anyway the move is going well. It's my first time not living with my parents and I think I'm doing really well on my own. I've managed to get more thesis work done this week than I did in the whole month of April. And it really inspires confidence that I'm able to take care of myself, I even made shakshouka for myself for dinner tonight. But it's making me wish I could live with hoggsband even sooner, I told him to wait until I finished my degree and got a job so I could support both of us. That just means I should work extra hard to get my masters so we can shack up, right?

Happy 420! I was outside riding my bike to the library yesterday, when I rode over a screw somebody left in the road, check it out, it's huge: 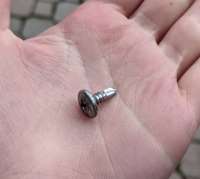 Anyway that punctured my tire. I've never changed a bike tire before, but I decided I'd give it a try to see if i could save some money. It ended up being really easy! All I had to do was replace the inflatable tube on the inside. i feel great now, i feel empowered like i could fix anything. i could probably build a house now if i wanted to 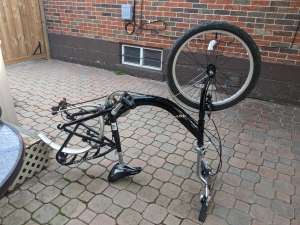 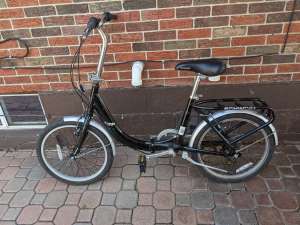 good as new! never pay money for what you can learn to do yourself.

I recently took this online quiz for fun. I got 105/1000, although I think probably only 80 of those should count. It's both less and more than i expected, less because i feel like i have read more than 75 books and most of those were pretty well known. More because i mostly read classics and not really even the most popular ones + i only started this little project of mine last year, and a lot of those are long books so i have more pages and fewer books logged overall. This however does lend credence to my theory about "people who make it a part of their personality that they read books", that:

and also this lets me add a new piece to that theory by which i mean, they'll add books they read in school as a requirement (not necessarily bad, i do that too), but to pad out their numbers to make it seem like they do a lot more reading than they actually do, they'll include books from way way before the standard course of high school english class books. By which i mean, childrens books they were probably read aloud from in kindergarten that they probably don't actually remember, they just know the title from their childhood. Like 'a very hungry caterpillar' or 'if you give a mouse a cookie' types. you're telling me you read "everybody poops" at age 33? for fun? because you wanted to? And not to start a debate on which types of literature "counts" as reading, Hogg just has a higher standard for which books she considers herself as having "read", and which ones contribute to her overall goal to "complete the western canon". For hogg to include a book on her storygraph it has to; If these types of people could include reading the cover of people magazine in line at the grocery store on their goodreads accounts to make the number go up they would. To tell you the truth i kind of have just a general distrust of people who say they "like books". I read a lot, especially now, I like reading - it's a little bit relaxing. But probably 99% of the books i've read seriously stunk. I feel confident in saying 99.99999% of all books just suck. Most books aren't that good. You have to develop some kind of personal taste or critical thinking skills to be able to distill out the 9 or 8 of them that were actually worth your time, just like TV, movies, video games, and everything else.